Don`t get your hopes up . .This is not a blog

With Ginger abandoning the site no one will be blogging here anymore. Sorry. I declare my freedom from blogging and sitting for hours in front of any computer. We did some nice blogging on this site. I will leave them up for future readers but the truth is we no longer live in Brazil. In October of 2008 the Commandante and I moved back to Portugal and we are quite happy here. I will not blog anymore so you will have to pik up travel bits from other Portuguese bloggers. 2 kisses all around. Goodbye, RoseMary

It is the beginning of another year. We all make resolutions on the eve of a new year and one of mine was to try and make headway in my constant battle to adjust to living abroad. I got into blogging, following Rosemary, not really making my own way. Today with the help of a friend, I decided to move my blog entries to my Flowers and More blog site.
I have declared my independence.
CLICK http://gingersflowers.blogspot.com/ to read new 2009 entries.

Posted by GingerV at Thursday, January 08, 2009 No comments:

Out with the Old and in with the New

During the five years we have lived in the apartment in Ipanema, we have heard many stories about the two houses and one apartment building sitting vacant accross the street.
It is (or was) apparent that at one point they were quite handsome homes. They had the look of many of the houses that are still scattered throughout Copacabana, Ipenema and Leblon -

houses preserved with loving care.
We heard that at one point they were private homes, beach houses or vacation homes for the rather rich that lived in the old central Rio or possibly even Sao Paulo. At the turn of the century (20th) this was the country - incredible thought isn't it? It was farm land, none of the tunnels that ease access to this part of town were there, driving over (hum, driving? maybe coming by wagon or horse, and surely byway of trail or small dirt roads) for the weekend or the summer at the beach just like all Brazilians love do today.
Back to the houses accross the street - we heard that these houses and the building were once a

famous school. We heard that all this property was owned by one family. That at one point it was all for sale, and sold and then one of the family protested the sale.

We heard that the government (or the family member or other parties depending on which porteiro was telling the story) wanted the property protected as a historical sight. It (the property) was in limbo.
In limbo means - no maintenance was done. I imagine no taxes paid. One weekend about 3 years ago there was pounding in the dark of night and part

of the roof and some of the windows disappeared before the police came. At that point a high white wall went up and was topped with barbwire (razor wire) - so someone cared. (the wall was soon dirty and 3rd world looking)
The three years passed. Even though great expense was expended to put up a fence, iron bars on the lower windows and to post a guard at night, no effort was made to patch the roof and the natural vegetation began to take back the land. Yes, trees began to grow out of the roof. Green slime and other growth began to cover the outer walls, run down the side of the houses generally creating a great eye sore. I am sorry but I didn't take photos of the trees - I was going to one day and never did.

On the 29th of December 2008, an engineering sign appeared, then workers. About 20 workers came and took the remaining roof tiles, all the doors and windows, piping and who knows what else that might be considered recyclable. In less than one day the houses were shells. (the old apartment building was always a shell)ON the 30th a gate in the wall appeared and then a bulldozer arrived and the houses began to come down. Today the 31st, more work with the bulldozer finished off one house, and two men began with sludgehammers on the apartment building.
Now it is clear that this is a very big piece of land. We now can see that there was a large 3 story building at the back, by the archetecture looks mid 70s. Maybe this was added when the school was there.
So now there will be a new apartment building or a fancy hotel inserted in this space. The battle between family members and the government was won through neglect. But no matter on what battlefield it was won - after 5 years of looking at inner city decay and blight in our own front yard, we can only benefit by the taking out of the old and bringing in of the new. HAPPY NEW YEAR! Ginger and Camillo
Posted by GingerV at Wednesday, December 31, 2008 No comments:

Since comming to visit for the first time, to moving here I have always wondered where the term "cidade maravilhosa" came into play in reference to the city that I know now. This little clip helped to expain. the film is 7 minutes long, take the time to watch it through. Thank you Sisi for sending it to me.

Posted by GingerV at Wednesday, December 24, 2008 No comments:

After months of clouds and rain, December 22 dawned with crystal clear, bright blue skies.
Oh joy to the season.

And with the sun came heat and humidity, snarled traffic and bad tempers.

I have to ask WHERE"S the joy?


Yesterday on the December 23, the streets surrounding our Ipanema apartment were so clogged they were at a complete 'horn blowing' stop. The streets were clogged with busses, trucks, tourists (cars) and shoppers (cars). Yes, in the highth of this joyful season large delivery trucks double parked along the steets further testing the tempers, the goodwill (?) of all the holiday shoppers and beach goers competing for parking space. (The free one of course, the parking lots below ground and in the shopping centers are so expensive everyone drives around and around looking for 'just the right' free space on the street). I don't really know of other areas in Rio but in Ipanema the 'lojas' are not big on holiday decorations. The local association of business people line the sidewalks with what is meant to be a cheerful and welcoming carpet. In past years it was red, 'rolling out the red carpet'. This year is was a faded green and after so much rain and muddy footprints it looks a little worse for wear. There are a few stores with glass balls, some with poinsettias, and some with a Santa or an Angel in their front window, but compared with Gramado the frantic aura of noise, pushing and shoving of Ipanema I have to ask WHERES THE JOY?
Christmas Eve - today the number of cars has dropped to a managable number, fewer busses, only an occaisonal delivery truck and what seems to be more taxis. Today the taxis are blowing their horns, but everyone else seems to have lowered their 'rush, rush' mode to holiday mode. Camillo and I walked around the corner and had a Caiprinha to get into the mood. There are still a lot of shoppers, but maybe they are only tourists - the Cariocas have gone home to cook dinner and begin enjoying the time with their families and the remaining tourists are out to enjoy their hot and sunny Christmas in RIO.
Posted by GingerV at Wednesday, December 24, 2008 No comments:

If you have browsed through my blog entries, you

Christmas when Camillo and I visited Gramado in Southern Brasil.

For me that trip ranks very high on the list of places we have spent Christmas week.
This small town, south of Port Alegre, celebrates Christmas in a very big hearted way. Every street is strung with lights, every shop window is decorated to catch the eye. There is every version of

handcrafted Santa that one can possibly imagine.

City Park outside of the

dormitory and Santa's house with his private stash of toys from Christmases past. 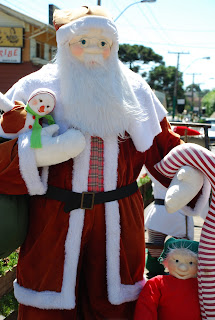 And the best, the very best is the Cathedral with its high steeple, brightly lit, and the hand carved Nativity. This is Christmas the way it should be

celebrated. With the intent by their family to give pleasure, to be shared with your family.
Merry Christmas
Ginger and Camillo
Posted by GingerV at Friday, December 19, 2008 1 comment:

From travel to Arizona, shopping, doctors appointments, more shopping, lunching with friends, seeing my grandaughter play volleyball and her dance team dance at the girls basketball games, to cooking, cooking, cooking the Thanksgiving dinner and the final running non-stop through the last weekend in Houston, this two month trip to the USA went by much too quickly.

Our trip to the Museum of Natural Science that I wrote about in my last entry did not go as expected. Luisa did not join us - she was feeling peaked. The grandsons had seen the first show and immediately tried talking me out of this one. Marissa and I were not totally convinced that we wanted to see real bodies preserved or otherwise. So we did a re-run through the museum, including the display of gems and minerals (I love this part) then we went to two different Planetarium shows and then to lunch. We enjoyed ourselves totally.

While in Houston I also

managed to take a photography class and am now all excited about taking 'narative' photos. let me know if you notice any difference in the photos posted.

like the end of year months will go by even faster. The first weekend back (is it less than a week ago I returned?) we had our annual December "thank goodness its spring" churrasco. We have gained two new friends this year, both Italians, so Camillo has compatriots to enjoy the wine cellar with. At this year's churrasco there were about 10 more eaters than on our list, I

never understand how this happens. Nobody seemed to mind (but me of course) that we ran out of potato salad and coleslaw early on and had only meat and chocolate cake to help them through the afternoon. The food was very good by the way.
On Sunday we went to Creamery Geneve to buy goats cheese and have lunch. the drive on the Teresopolis/Friburgo road was exceptional after our weeks and weeks of rain.

Posted by GingerV at Tuesday, December 09, 2008 No comments: 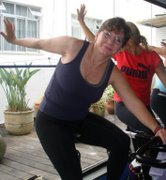